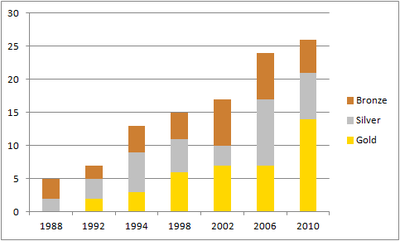 The 1988 Winter Olympics, officially known as the XV Olympic Winter Games , was a Winter Olympics multi-sport event celebrated in and around Calgary, Canada between February 13 and 28, 1988. The host city was selected in 1981 over Falun, Sweden and Cortina d'Ampezzo, Italy. Most events took place in Calgary while several skiing events were held in the mountain resorts of Nakiska and Canmore, west of the city.
A then-record 57 nations competed and 1,423 athletes participated. The Soviet Union won the most medals with 29, followed by East Germany with 25. As it had in Montreal in 1976, Canada again failed to win a gold medal in an official medal event as the host nation. Finnish ski jumper Matti Nykänen and Dutch speed skater Yvonne van Gennip were individual medal leaders with each winning three gold medals. The games are also remembered for the "heroic failure" of British ski jumper Eddie "The Eagle" Edwards, and the Winter Olympic début of the Jamaica national bobsled team, both of which would be subjects of major feature films about their participation in the games.