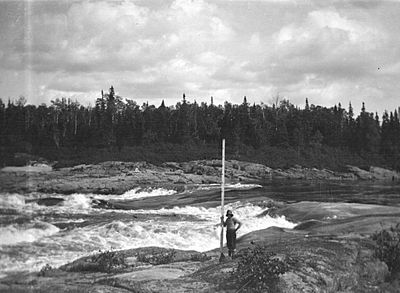 The Manicouagan River is a river in Côte-Nord region of Quebec, Canada. The river originates in the Manicouagan Reservoir and flows approximately 200 kilometres south, emptying into the Saint Lawrence River near Baie-Comeau. The reservoir, also known as Lake Manicouagan, lies within the remnant of an ancient eroded impact crater . It was formed following the impact of a 5 kilometres diameter asteroid which excavated a crater originally about 100 km wide, although erosion and deposition of sediments have since reduced the visible diameter to about 72 km . The Manicouagan crater is the sixth-largest confirmed impact crater known on earth.
The river's name, often abbreviated to Manic, is believed to come from a Montagnais word meaning "where tree bark is found". However the Innu of Betsiamites call it Menukuanistuk Shipu, which means "river of the cup".