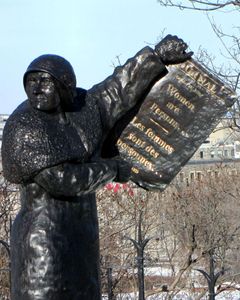 Statue of Nellie McClung. Nellie Letitia McClung, was a Canadian feminist, politician, author, and social activist. She was a part of the social and moral reform movements prevalent in Western Canada in the early 1900s. In 1927, McClung and four other women: Henrietta Muir Edwards, Emily Murphy, Louise McKinney and Irene Parlby, who together came to be known as "The Famous Five" launched the "Persons Case," contending that women could be "qualified persons" eligible to sit in the Senate. The Supreme Court of Canada ruled that current law did not recognize them as such. However, the case was won upon appeal to the Judicial Committee of the British Privy Council—the court of last resort for Canada at that time.