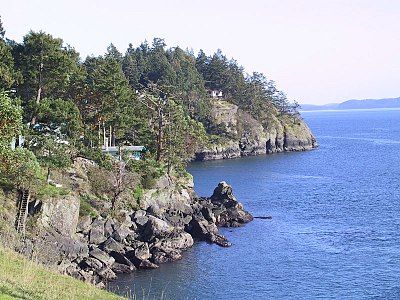 Pender Island is one of the Southern Gulf Islands located in the Gulf of Georgia, British Columbia, Canada. Pender Island is approximately 34 km2 in area and is home to about 2,250 permanent residents, as well as a large seasonal population. Like most of the rest of the Southern Gulf Islands, Pender Island enjoys a sub-Mediterranean climate and features open farmland, rolling forested hills, several lakes and small mountains, as well as many coves and beaches.
Pender Island consists of two islands, North Pender and South Pender, which are separated by a narrow canal originally dredged in 1903. In 1955 the islands were connected by a one lane bridge, as it remains today.