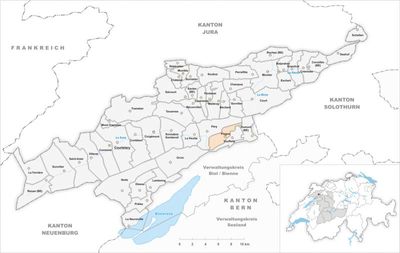 Plagne is a former municipality in the Jura bernois administrative district in the canton of Bern in Switzerland. It is located in the French-speaking Bernese Jura . On 1 January 2014 the former municipalities of Plagne and Vauffelin merged into the new municipality of Sauge.
Plagne is first mentioned in 1311 as Blenn, though this comes from a 1441 copy of the original document. In 1610 it was mentioned as Plaentsch. The municipality was formerly known by its German name Plentsch, however, that name is no longer used.