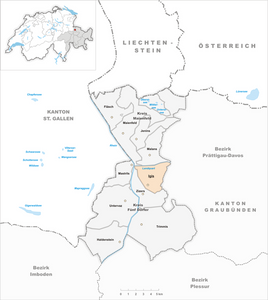 Igis is a former municipality in the district of Landquart in the Swiss canton of Graubünden. Far better known than its proper name Igis is its hamlet Landquart, because of its Rail Station and motorway exit. The municipalities of Igis and Mastrils merged on 1 January 2012 into the new municipality of Landquart.
Igis is first mentioned about 840 as Ovinae/Aviuns. In 1149 it was mentioned as Auuine, in 1225 as Huiuns and in 1253 as Yges.