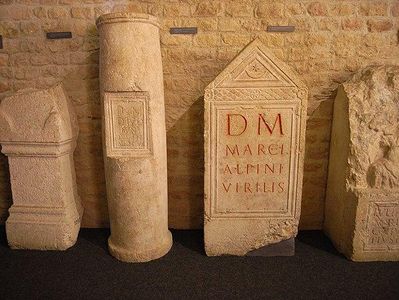 The roots of Avenches go back to the Celts. A tribe of Helvetians had built a settlement on the hills of Bois de Châtel, south of the later Roman settlement. Nearby the Helvetii seem to have had their capital on Mont Vully as shown in recent archaeological excavation. The canal-La Broye-which joins Lac Morat to Lac Neuchâtel is thought to be Roman in origin.

The establishment of the Roman settlement of Aventicum, which became the capital of the province, took place around 15-13 B.C. The name comes from the Helvetian spring goddess Aventia. After patronage by the emperor Vespasian, Aventicum soon developed into a blooming commercial center with over 20,000 inhabitants. The town was granted colonia status-a retirement location for legionaries- although the built up area of the town occupied only a fraction of the walled area -the walls are some 5.6 kilometers in length. The walls were clearly a statement of status rather than being a practical defensive system. Excavations have revealed the detail of the theatre and major temple complex dedicated to the "genius" of Helvetia-Roman Switzerland. One column of the temple stands as the "cigognier"- formerly a nesting site for storks. Other parts of the city still visible are the amphitheatre which includes a later tower now housing the Professor Hans Bogli museum, the baths, the walls, two of the entrances gates, a smaller temple and part of a place building. Excavated but reburied is much of the Roman city. This part of Switzerland was invaded by the Alamanni tribe in the 280's who settled the German speaking parts of Switzerland giving the area its characteristic dialect of German. Rome never really held the area again and after the fall of Rome in the 5th century, a much smaller settlement was built on the former acropolis of the by now abandoned Roman town. The theatre had a short life as a separate defended area. Throughout this period, the town remained the seat of a bishopric and had at least two churches . When the bishop moved his seat to Lausanne in the sixth century, the decline of the former Roman city was complete.