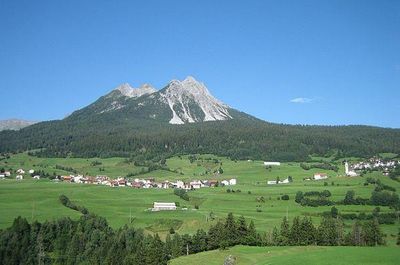 Salouf is a village and former municipality in the Sursés in the district of Albula in the canton of Graubünden in Switzerland. On 1 January 2016 the former municipalities of Bivio, Cunter, Marmorera, Mulegns, Riom-Parsonz, Salouf, Savognin, Sur and Tinizong-Rona merged to form the new municipality of Surses.
Salouf's coat of arms depicts a shield with a black background, in the middle a white fleur-de-lys. In each corner and at the bottom is one six pointed silver star. The design is from the shield of Benedict Fontana who lived in Salouf.