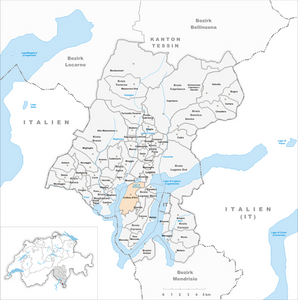 Collina d'Oro is a municipality in the district of Lugano in the canton of Ticino in Switzerland. It was formed from the 2004 union of the villages of Agra, Gentilino, and Montagnola. On 1 April 2012, it incorporated the formerly independent municipality of Carabietta.
Gentilino is first mentioned in 1210 as Gentarino. Montagnola is first mentioned in 1226 as Montegnola'.