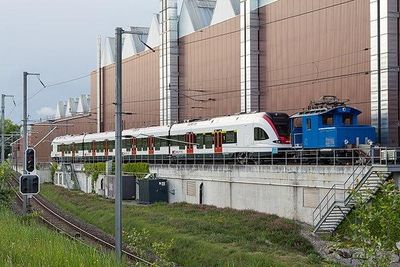 Stadler Rail is a Swiss manufacturer of railway rolling stock, with an emphasis on regional train multiple units and trams. It is headquartered in Bussnang, Switzerland.

Stadler Rail is also focused on niche products and is one of the last European manufacturers of rack railway rolling stock. The holding company consists of nine subsidiaries with locations in Algeria, Germany, Italy, the Netherlands, Austria, Poland, Switzerland, Spain, Czech Republic, Hungary, Belarus and the United States. Stadler Rail employed approximately 6,100 employees by 2012, including 2,750 in Switzerland, 1,200 in Germany, 1,000 in Belarus, 400 in Hungary and 400 in Poland. This had increased to 7,000 employees by 2017. Stadler formed joint venture with Azerbaijan-based company International Railway Distribution LLC in 2014.