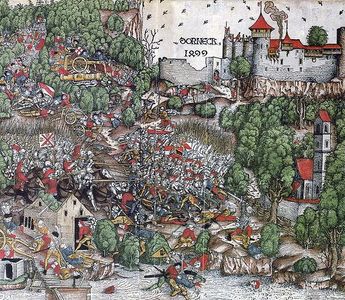 The Battle of Dornach was a battle fought on 22 July 1499 between the troops of Emperor Maximilian I and the Old Swiss Confederacy close to the Swiss village of Dornach. The battle turned into a decisive defeat for Maximilian, and concluded the Swabian War between the Swiss and the Swabian League.
On 19 July, Imperial troops marching on Dornach castle were sighted, and Solothurn called Bern for help. Bern sent 5000 troops, Zurich 400, and smaller contingents from Uri, Unterwalden and Zug also started to move to Dornach. On 20 July, 600 troops left Lucerne. The Austrians had about 16,000 troops. Many of these were bathing in the Birs. The first attacks on 22 July were executed by the troops of Bern, Zurich and Solothurn, but they were beaten back. Only with the arrival of the reinforcements from Lucerne and Zug, which suddenly broke out of the woods "with horns and shouting" were the Imperial troops turned to flight after several hours' fighting.