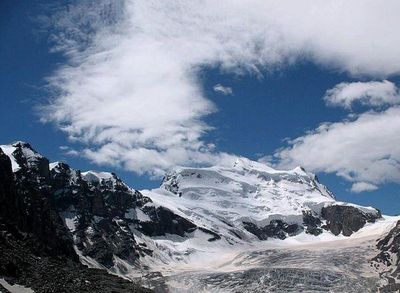 The Grand Combin is a mountain massif in the western Pennine Alps in Switzerland. With its 4,314 metres highest summit, the Combin de Grafeneire, it is one of the highest peaks in the Alps and the second most prominent of its range. The Grand Combin is also a large glaciated massif consisting of several summits, among which three are above 4000 metres , Combin de Valsorey 4,183 m , Combin de la Tsessette 4,134 m ).

The normal route starts from the Panossière Hut, which lies on the north side in the Corbassière valley. Despite the fact that no major difficulties exist, a particularly dangerous passage has to be traversed on the north flank: Le Corridor. It is a couloir dominated by seracs continuously falling on it.