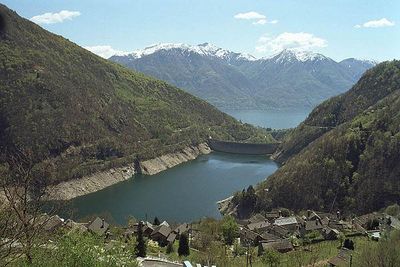 The Contra Dam, commonly known as the Verzasca Dam and the Locarno Dam, is an arch dam on the Verzasca River in the Val Verzasca of Ticino, Switzerland. The dam creates Lago di Vogorno 2 km upstream of Lake Maggiore and supports the 105 MW Verzasca hydroelectric power station. It was constructed between 1961 and 1965 and starting shortly after its reservoir was filled, a series of earthquakes related to its water load occurred until 1971. The dam is owned and operated by Verzasca SA and is the fourth tallest in Switzerland.
The dam became a popular bungee jumping venue after a James Bond stuntman jumped off it in the opening scene of the 1995 film GoldenEye; a stunt voted as the best movie stunt of all time in a 2002 Sky Movies poll.