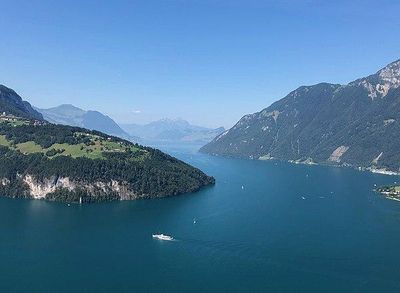 The lake has a complicated shape, with several sharp bends and four arms. It starts in the south-north bound Reuss Valley between steep cliffs above the Urnersee from Flüelen towards Brunnen to the north before it makes a sharp bend to the west where it continues into the Gersauer Becken. Here is also the deepest point of the lake with 214 m . Even more west of it is the Buochser Bucht, but the lake sharply turns north again through the narrow opening between the Unter Nas of the Bürgenstock to the west and the Ober Nas of the Rigi to the east to reach the Vitznauer Bucht. In front of Vitznau below the Rigi the lake turns sharply west again to reach the center of a four-arm cross, called the Chrütztrichter . Here converge the Vitznauer Bucht with the Küssnachtersee from the north, the Luzernersee from the west, and the Horwer Bucht and the Stanser Trichter to the south, which is to be found right below the northeast side of the Pilatus and the west side of the Bürgenstock. At the very narrow pass between the east dropper of the Pilatus and Stansstad the lake reaches its southwestern arm at Alpnachstad on the steep southern foothills of the Pilatus, the Alpnachersee. The lake drains its water into the Reuss in Lucerne from its arm called Luzernersee .