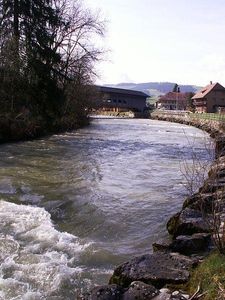 The Emme is a river in Switzerland. It rises in the Alps between the peaks of Hohgant and Augstmatthorn in the canton of Bern. The Emme is 80 km long and flows through the Emmental and into the Aare below Solothurn. The drainage area is 983 km² . The average discharge at the mouth is approximately 20,000 litres per second. The maximum discharge can be up to 500,000 litres per second.

The Emme is known for its sudden variations in water discharge. The narration Die Wassernot im Emmental by Jeremias Gotthelf impressively describes a very large and destructive, and therefore well-known, flood which occurred August 13, 1837. This and other floods led to the building of numerous canals and dams in the 19th century.