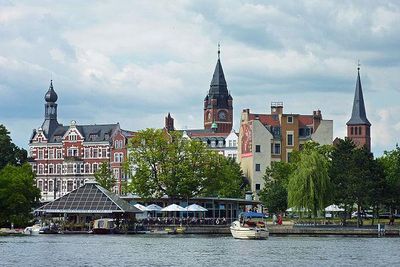 Köpenick ) is a historic town and locality situated at the confluence of the rivers Dahme and Spree in the south-east of the German capital city of Berlin. It was formerly known as Copanic and then Cöpenick, only officially adopting the current spelling in 1931. It is also known for the famous imposter Hauptmann von Köpenick.

Prior to its incorporation into Berlin in 1920, Köpenick had been an independent town. It then became a borough of Berlin, and with an area of 128 km2 , Berlin's largest. As a result of Berlin's 2001 administrative reform, the borough of Köpenick was merged with that of Treptow to create the current borough of Treptow-Köpenick.