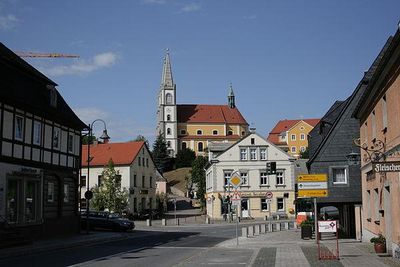 Schirgiswalde is a town and a former municipality in the district of Bautzen in Saxony in Germany. Since 1 January 2011, it is part of the town Schirgiswalde-Kirschau. It is located on the river Spree, 15 km south of Bautzen. The small town is an official place of relaxation . Together with the villages of Crostau and Kirschau it represents the administrative community of Schirgiswalde. Some smaller parts of the town are Neuschirgiswalde upon a hill and Petersbach.

The village of Schirgiswalde first has been mentioned in a document from the year 1346. In the Thirty Years' War most of the settlement was destroyed with the majority of the populace perishing in the conflict. To aid the rebuilding and economic reconstruction of the community, the lord of the manor of Schirgiswalde made it a town in 1665. Later, the small town became part of the land owned by the Domstift in Bautzen, effectively turning it into a property of the church. Until the midst of the 19th century, it stayed under the regime and the right of the Domstift.