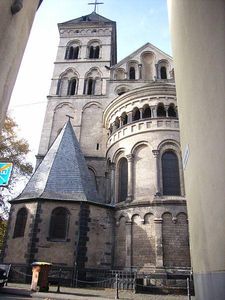 Andernach is a town in the district of Mayen-Koblenz, in Rhineland-Palatinate, Germany, of about 30,000 inhabitants. It is situated towards the end of the Neuwied basin on the left bank of the Rhine between the former tiny fishing village of Fornich in the north and the mouth of the small river Nette in the southeast, just 13 miles north of Koblenz, with its five external town districts: Kell, Miesenheim, Eich, Namedy, and Bad Tönisstein.

A few hundred metres downstream of Andernach the Rhine valley narrows from both sides forming the northern part of the romantic Middle Rhine stretch. Already in Roman times the place the narrow passage begins was named "Porta Antunnacensis" or Andernachian Gate. It is formed by two hills, the Krahnenberg   and the Engwetter on the right bank near the wine village Leutesdorf . The crane hill is named after the old crane beneath his foot ; in earlier times the hill was named "Geiersberg" .