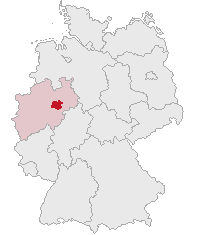 Source: own work by Geograv

Soest ) is a Kreis in the middle of North Rhine-Westphalia, Germany. Neighbouring districts are Warendorf, Gütersloh, Paderborn, Hochsauerland, Märkischer Kreis, Unna and the independent town of Hamm.

In medieval times Soest was the biggest town in Westphalia; however, after it liberated itself from the bishops of Cologne in the Soester Fehde in 1449 it slowly lost importance, only to gain it again when in 1816 the new Prussian government created the district. In 1975 the district was merged with the neighbouring district of Lippstadt and parts of the former district of Arnsberg.