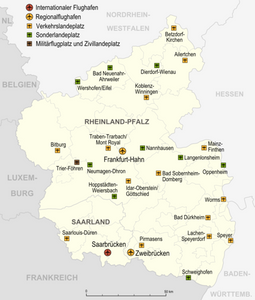 Rhineland-Palatinate is a state of Germany located in the west of the country. Covering an area of 19,846 km2 and with a population of 4.05 million inhabitants, it is the seventh-most populous German state. Mainz is the state capital and largest city, while other major cities include Ludwigshafen am Rhein, Koblenz, Trier, Kaiserslautern and Worms. Rhineland-Palatinate is surrounded by the states of North Rhine-Westphalia, Saarland, Baden-Württemberg and Hesse. It also borders three foreign countries: France, Luxembourg and Belgium.

Rhineland-Palatinate was established in 1946 after World War II, from territory of the historically separate regions of the Free State of Prussia, People's State of Hesse and Bavaria, by the French military administration in Allied-occupied Germany. Rhineland-Palatinate became part of the Federal Republic of Germany in 1949 and shared the country's only border with the Saar Protectorate until it was returned to German control in 1957. Rhineland-Palatinate has since developed its own identity built on its natural and cultural heritage, including the extensive Palatinate winegrowing region, its picturesque landscapes and many castles and palaces.