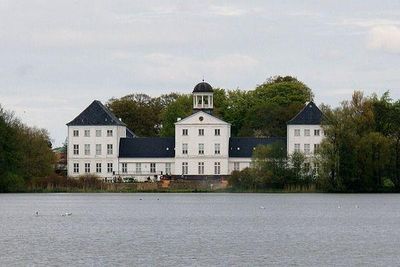 Gråsten Palace is best known for being the summer residence of the Danish Royal Family. It is located in Gråsten in the Jutland region of southern Denmark. The main house has a modern, all-white facade, with Venetian doors opening onto sweeping, manicured lawns and gravel walkways. The grounds include a huge stables court.
Legend says that Gråsten Palace is where Hans Christian Andersen wrote, The Little Match Girl, during his visit in 1845, but that's not true. He wrote it when he visited Augustenborg Palace. The south wing of the present-day main house is believed to be built on the site of the second structure, that was built in 1603 to replace a hunting lodge which had been destroyed in a fire in the middle of the 16th century. After about three and a half succeeding centuries of ownership by Danish nobles, Gråsten Slot was taken over by the State, extensively restored, and by 1935, it was the summer residence for then-Crown Prince Frederik, later King Frederik IX, and Crown Princess Ingrid, later Queen Ingrid, who adored the palace until her death in November 2000. It is the usual venue for the royal family's official summer photo shoot.