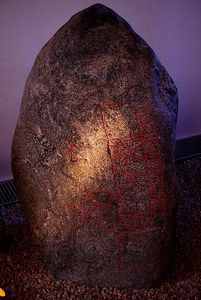 The Snoldelev Stone, listed as DR 248 in the Rundata catalog, is a 9th-century runestone that was originally located at Snoldelev, Ramsø, Denmark.

The Snoldelev Stone, which is 1.25 meters in height, is decorated with a design of three drinking horns interlocking as incomplete Borromean rings . The triple horn motif has been compared to a triskelion, or to the valknut symbol, and since 2006 has been adopted as the official symbol of the Asatru Folk Assembly. The stone was first noted in 1810, and was turned over to the national Antiquities Commission in 1811. The runestone is now housed at the National Museum of Denmark in Copenhagen, Denmark.