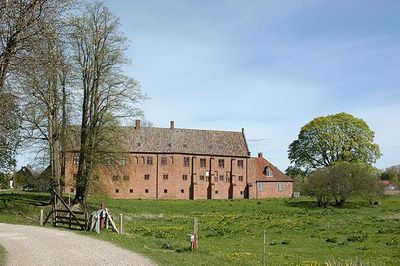 Esrum Abbey, also Esrom Abbey was the second Cistercian monastery founded in Denmark, located near Hillerød in Region Hovedstaden, on the island of Zealand , on the north side of the Esrum Sø near Esbønderup and Græsted.

Esrum Abbey began as a Benedictine foundation, perhaps in about 1140, and was built near a pre-Christian religious site, later called Esrum Spring, where a small wooden stave chapel may have existed before the abbey was established. The foundation was taken over by the Cistercians in 1151 on the authority of Archbishop Eskil of Lund, and was counted as a daughter house of Clairvaux. Esrum in its turn became in the course of time the mother house of a number of other important Cistercian foundations: Vitskøl Abbey and Sorø Abbey in Denmark; Ryd Abbey, now in Schleswig-Holstein; and Kołbacz Abbey near Szczecin. Monks from Esrum also founded Dargun Abbey in Mecklenburg in 1172, but abandoned it after hostile military action in 1198, and the later history of Dargun rests on its re-foundation in 1208 from Doberan Abbey. The former community from Dargun went on however to found Eldena Abbey.