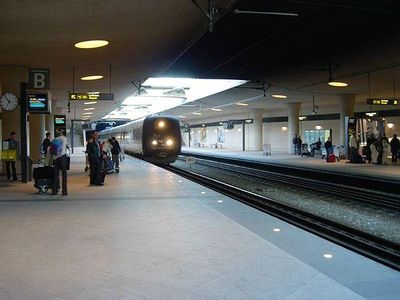 Copenhagen Airport, Kastrup Station is a railway station in Tårnby, Denmark, served by DSB’s regional trains including the Oresundtrain network. The nearby Lufthavnen metro station is served by the Copenhagen Metro’s line M2. The station opened on 27 September 1998, and was subsequently reconstructed and reopened on 28 September 2007, with a connection to the Copenhagen Metro opening the following month. The stations take their names from Copenhagen Airport, to which they are connected. It is linked to Ørestad station on the M1 line by DSB regional trains. It is located in fare zone 4.