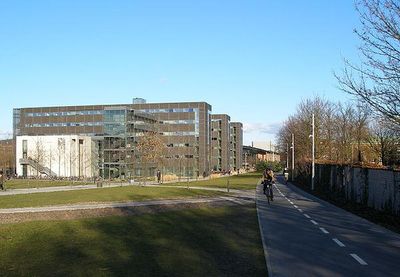 Copenhagen Business School often abbreviated and referred to as CBS , is a public university situated in Copenhagen, Denmark and is considered one of the most prestigious business schools in Western Europe and the world. CBS was established in 1917 by the Danish Society for the Advancement of Business Education and Research , however, it was not until 1920 that accounting became the first full study programme at CBS. Today CBS has more than 20,000 students, 2,000 employees and offers a wide range of undergraduate and graduate programmes within business, typically with an interdisciplinary and international focus. CBS is accredited by EQUIS , AMBA , as well as AACSB , thus making it one of the few schools worldwide to hold the "triple-crown" accreditation, and along with Aarhus BSS, the only two in Denmark.
The CBS campus is located in Frederiksberg, close to the center of Copenhagen, and centers on the school's main campus of Solbjerg Plads, completed in 2000. Since the Danish Universities Act of 2003, CBS has had a Board of Directors with an external majority. The Board of Directors appoints the President of CBS, who is currently Per Holten-Andersen. Most of the programs are taught in English, and more than half of the faculty is recruited from abroad, making CBS an international academic environment.