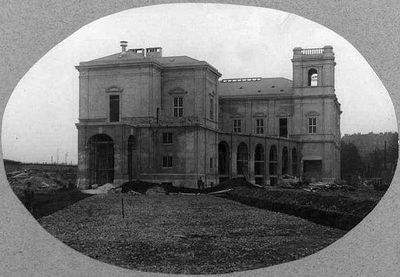 Palads Teatret , also known simply as the Palads, is a cinema operated by Nordisk Film in Copenhagen, Denmark. It offers a wide selection of films in its 17 auditoriums, more than in any other Danish cinema.
The Palads was established in Copenhagen's former central railway station on Axeltorv which had ceased operations in 1911 following the construction of a new station. After major reconstruction work, the cinema opened on 18 October 1912. With some 3,000 seats and a 30-man orchestra, it was Scandinavia's largest entertainment centre. The former station building was completely demolished in 1917, providing space for today's building designed by Andreas Clemmensen and Johan Nielsen. Kai Nielsen's sculpture of Ursus and the Bull was positioned on the roof from the beginning but was not gilded until 1949.