RouteYou » Wikipedia » Places of interest » Church of Our Saviour 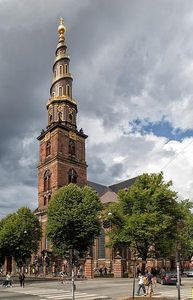 The Church of Our Saviour is a baroque church in Copenhagen, Denmark, most famous for its helix spire with an external winding staircase that can be climbed to the top, offering extensive views over central Copenhagen. It is also noted for its carillon, which is the largest in northern Europe and plays melodies every hour from 8 am to midnight.

When Christian IV planned Christianshavn in 1617, it was intended as an independent merchant's town on the island of Amager and it therefore needed a church. A temporary church was inaugurated in 1639 but construction of the present Church of Our Saviour, the design of Lambert van Haven, did not start until 1682. The church was inaugurated 14 years later in 1695 but important interior features like the altar had a notoriously temporary character and the tower still had no spire. The church got its permanent altar in 1732 but plans for construction of the spire was not revitalized until 1747 under the reign of Frederik V. The new architect on the project was Lauritz de Thurah. He soon abandoned van Haven's original design in favour of his own project that was approved by the King in 1749. Three years later the spire was finished and the King climbed the tower at a ceremony on 28 August 1752.