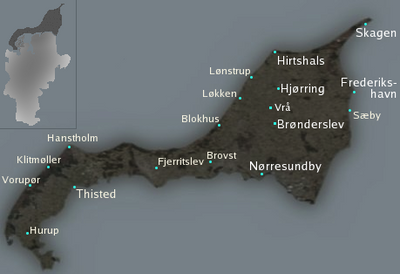 The North Jutlandic Island , Vendsyssel-Thy, or simply Jutland north of the Limfjord are lesser-used names for the northernmost part of Denmark and of Jutland. It is more common to refer to the three traditional districts Vendsyssel, Hanherred and Thy. The area was not surrounded by water until a storm in February 1825, which caused a connection between the North Sea and the fjord Limfjorden. Hence it is traditionally regarded as a part of Jutland rather than an island.

Geographically, it is the second largest island of Denmark after Zealand with a population of 296,700 on 1 January 2014.