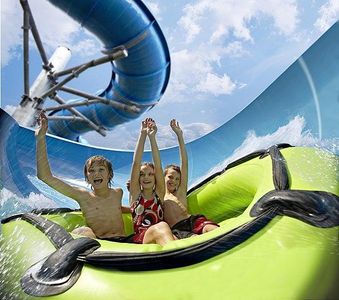 Fårup Summer Park is a theme park located in Fårup between Blokhus and Løkken in North Jutland, Denmark. The park, as the name suggests, is open during the summer months and attracts about 600,000 people each season. It is one of Denmark's biggest amusement parks and has the largest water park of any amusement park in the country. The park currently has six roller coasters and many other rides as well.

Opened on June 21, 1975 by the Kragelund family which had been in the wholesale business in Aalborg for 90 years when Anders Kragelund decided to sell and start a new business - an amusement park. He chose for the site of this venture North Jutland, a beautiful and popular holiday area in Denmark. The amusement park opened small with only a handful of children´s rides and attracted about 40.000 guests in its first operating season in 1975. Over the years the park has grown in popularity and been expanded in area as well, by 1983 many new rides had been added and about 350.000 people visited the park that year. In 1989 a water park was added . Since 2001 the park has added 5 new roller coasters to its slate, most recently in 2012 and 2013.