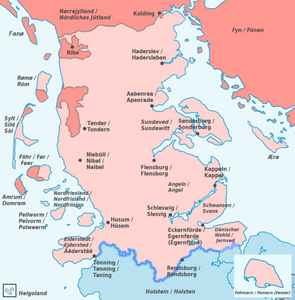 The Duchy of Schleswig was a duchy in Southern Jutland covering the area between about 60 km north and 70 km south of the current border between Germany and Denmark. The territory has been divided between the two countries since 1920, with Northern Schleswig in Denmark and Southern Schleswig in Germany. The region is also called Sleswick in English.

The area's traditional significance lies in the transfer of goods between the North Sea and the Baltic Sea, connecting the trade route through Russia with the trade routes along the Rhine and the Atlantic coast .