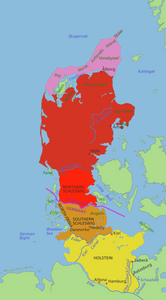 Jutland , also known as the Cimbric or Cimbrian Peninsula , is a peninsula of Northern Europe that forms the continental portion of Denmark and part of northern Germany. The names are derived from the Jutes and the Cimbri, respectively.