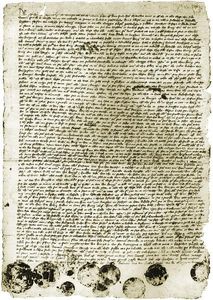 The Kalmar Union was a personal union that from 1397 to 1523 joined under a single monarch the three kingdoms of Denmark, Sweden , and Norway, together with Norway's overseas dependencies . The union was not quite continuous; there were several short interruptions. Legally, the countries remained separate sovereign states, but with their domestic and foreign policies being directed by a common monarch.

One main impetus for its formation was to block German expansion northward into the Baltic region. The main reason for its failure to survive was the perpetual struggle between the monarch, who wanted a strong unified state, and the Swedish and Danish nobility, which did not. Diverging interests gave rise to a conflict that would hamper the union in several intervals from the 1430s until its definitive breakup in 1523, when Gustav Vasa was elected as king of Sweden.