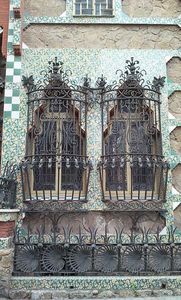 Casa Vicens is a house in Barcelona, designed by Antoni Gaudí, now a museum. It is located in the neighbourhood of Gràcia on Carrer de les Carolines, 20-26. It is considered one of the first buildings of Art Nouveau and was the first house designed by Gaudí.

The style of Casa Vicens is a reflection of Neo-Mudéjar architecture, one of the popular styles that can be seen throughout Gaudí's architecture, including oriental and neoclassical as well. However, what was unique about Gaudí was that he mixed different styles together and incorporated a variety of different materials, such as iron, glass, ceramic tiles and concrete, many of which can be seen in this building. Gaudí broke away from tradition and created his new language of architecture, and Casa Vicens represents a new chapter in the history of Catalan architecture as well as the beginning of a successful career for Gaudí.