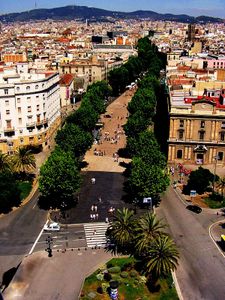 Running down the center of the Ciutat Vella (dividing the Raval and Barri Gòtic) are the boulevards Les Rambles, popularly known as La Rambla (in singular) since they are continuous, like a single street. Les Rambles stretches from Plaça Catalunya to the Mediterranean Sea and, since the 1990s, now extends out over the sea into one of Barcelona's newest centers of entertainment, Maremagnum. Each of Les Rambles has its own specialty. La Rambla de les Flors (The Flowers Rambla) is devoted to flower stands, another Rambla to animal vendors (selling mainly birds), and the lowest Rambla hosts temporary art fairs. El Mercat de Sant Josep (more commonly known as La Boqueria) and Gran Teatre del Liceu (the Opera House) are both located here. Les Rambles are among the most frequently travelled streets by pedestrians in Barcelona.