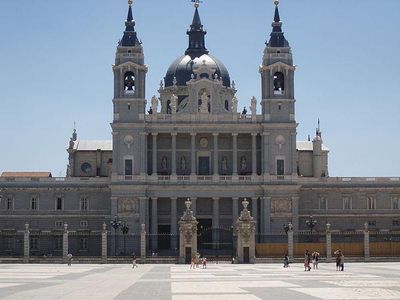 Almudena Cathedral is a Catholic church in Madrid, Spain. It is the seat of the Roman Catholic Archdiocese of Madrid. The cathedral was consecrated by Pope John Paul II in 1993.

When the capital of Spain was transferred from Toledo to Madrid in 1561, the seat of the Church in Spain remained in Toledo and the new capital had no cathedral. Plans to build a cathedral in Madrid dedicated to the Virgin of Almudena were discussed as early as the 16th century but even though Spain built more than 40 cities in the new world during that century, plenty of cathedrals and fortresses, the cost of expanding and keeping the Empire came first and the construction of Madrid's cathedral was postponed. Making the cathedral the largest that the world had ever seen was then a priority. All other main Spanish cities had centuries old cathedrals, and Madrid also has old churches, but the construction of Almudena only began in 1879.