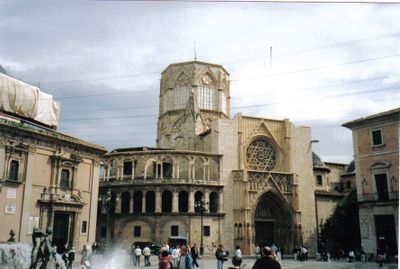 The Saint Mary of Valencia Cathedral (Catedral de Santa MarÝa de Valencia) is a Roman Catholic cathedral in Valencia, Spain. It was built between the 13th and 15th centuries, and is primarily of Gothic style, although it contains elements of Baroque and Romanesque architecture. It has three doors. The Puerto de Palau is Romanesque, Puerto de Hierros baroque, and Puerto de los ApostolÞs gothic.

It also houses the oldest museum in the city (Sala Capitular), which contains the Holy Chalice of Valencia. This is the official chalice used by Christ on the last supper - the very sacred Holy Grail.