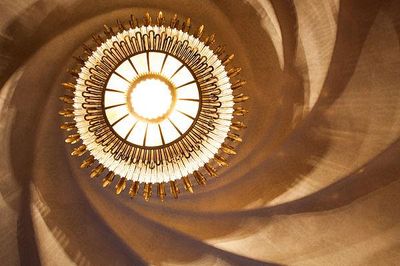 Casa Batlló is a building in the center of Barcelona. It was designed by Antoni Gaudí, and is considered one of his masterpieces. A remodel of a previously built house, it was redesigned in 1904 by Gaudí and has been refurbished several times after that. Gaudí's assistants Domènec Sugrañes i Gras, Josep Canaleta and Joan Rubió also contributed to the renovation project. The local name for the building is Casa dels ossos , as it has a visceral, skeletal organic quality.

Like everything Gaudí designed, it is only identifiable as Modernisme or Art Nouveau in the broadest sense. The ground floor, in particular, has unusual tracery, irregular oval windows and flowing sculpted stone work. There are few straight lines, and much of the façade is decorated with a colorful mosaic made of broken ceramic tiles . The roof is arched and was likened to the back of a dragon or dinosaur. A common theory about the building is that the rounded feature to the left of centre, terminating at the top in a turret and cross, represents the lance of Saint George , which has been plunged into the back of the dragon.