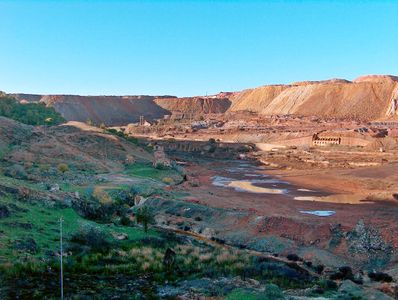 Minas de Riotinto is the largest opencast mine in the world. The copper ore is mined in the Corta Atalaya pit, that measures 1200 m by 900 m in size and is 350 metres deep. The ore colours the river water red and gives the mine its name. Football was played for the very first time in Spain in the Rio Tinto mines. It was introduced by local English workers after the mine was taken over in 1873. Enthusiasm for football grew so strong that, for a time in the 1920s, there were more than 20 football clubs in the town whose population numbered only around 12.000.