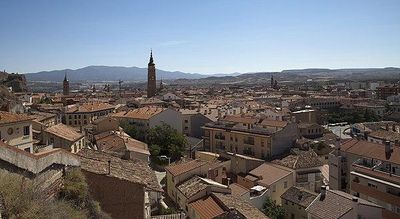 Calatayud is a municipality in the Province of Zaragoza, within Aragón, Spain, lying on the river Jalón, in the midst of the Sistema Ibérico mountain range. It is the second-largest town in the province after the capital, Zaragoza, and the largest town in Aragón other than the three provincial capitals. It is the seat of the comarca of Calatayud. Its population has been declining during the last decade due to migration.
The city has the title Muy noble, leal, siempre augusta y fidelísima ciudad de Calatayud . The first democratic elections after General Franco's regime were called for 15 June 1977. In Calatayud they were held one day earlier than all the rest of Spain, in order to prepare for a visit there by King Juan Carlos I.