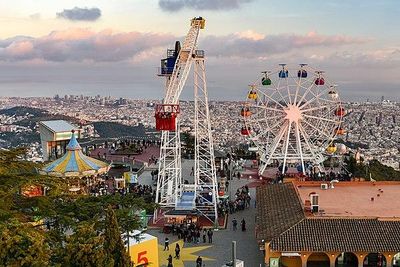 is an amusement park located on Tibidabo in the Collserola Ridge in Barcelona. The park was built in 1899 by the entrepreneur Salvador Andreu and opened in 1905. The park is among the oldest in the world still functioning. It is Spain's longest running amusement park and Europe's third-oldest. Most of the original rides, some of which date to the turn of the 20th century, are still in use. The park is now owned by the Barcelona City Council.
A popular ride at the park is the 1928 Avió airplane ride, a single-car carousel giving the impression of flight above the city, a novelty at the time. Riders board a replica of the aircraft that first flew from Barcelona to Madrid. The park was featured in the Woody Allen film, Vicky Cristina Barcelona.