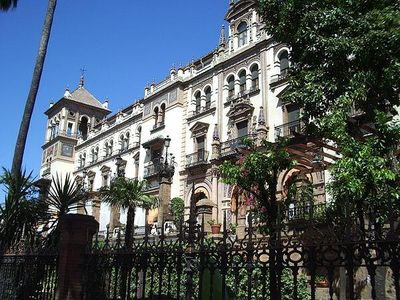 Hotel Alfonso XIII is a historic hotel in Seville, Spain, located on Calle San Fernando, next to the University of Seville. Designed by the architect José Espiau y Muñoz, it was built between 1916 and 1928 especially for the Ibero-American Exposition of 1929. It officially opened on April 28, 1929, with a sumptuous banquet attended by King Alfonso XIII and Queen Victoria Eugenie of Battenberg. The hotel is owned by the City of Seville and managed by The Luxury Collection division of Starwood Hotels.

Designed by architect José Espiau y Muñoz, the hotel was built between 1916 and 1928, and officially inaugurated on 28 April 1929, with a celebration preceded by King Alfonso XIII and Queen Victoria Eugenia. The reason of the celebration was the wedding of Infanta Isabel with count Juan Zamoyski.