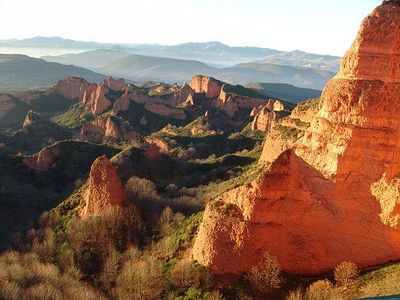 Las Médulas is a historic gold-mining site near the town of Ponferrada in the comarca of El Bierzo . It was the most important gold mine, as well as the largest open-pit gold mine, in the entire Roman Empire. Las Médulas Cultural Landscape is listed by UNESCO as a World Heritage Site. Advanced aerial surveys conducted in 2014 using LIDAR have confirmed the wide extent of the Roman-era works.
The spectacular landscape of Las Médulas resulted from the ruina montium , a Roman mining technique described by Pliny the Elder in 77 AD. The technique employed was a type of hydraulic mining which involved undermining a mountain with large quantities of water. The water was supplied by interbasin transfer. At least seven long aqueducts tapped the streams of the La Cabrera district at a range of altitudes. The same aqueducts were used to wash the extensive alluvial gold deposits.