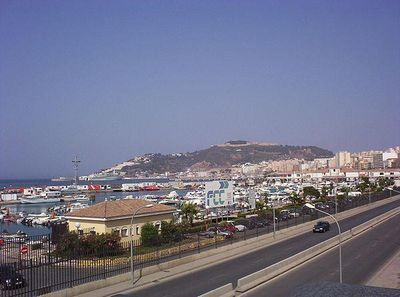 Monte Hacho is a low mountain that overlooks the Spanish city of Ceuta, on the north coast of Africa. Monte Hacho is positioned on the Mediterranean coast at the Strait of Gibraltar opposite Gibraltar, and along with the Rock of Gibraltar is claimed by some to be one of the Pillars of Hercules . According to the legend Hercules pushed apart the two mountains and created a link between the Mediterranean and the Atlantic.
In classical civilization it was possibly known as Mons Abila , although this title could possibly refer to Jebel Musa instead.