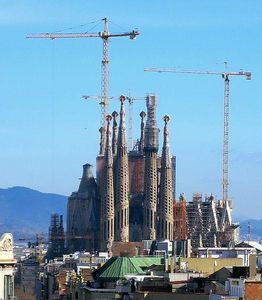 The Basílica de la Sagrada Família ), also known as the Sagrada Família, is a large unfinished Roman Catholic minor basilica in Barcelona, Catalonia, Spain. Designed by Spanish/Catalan architect Antoni Gaudí , his work on the building is part of a UNESCO World Heritage Site. On 7 November 2010, Pope Benedict XVI consecrated the church and proclaimed it a minor basilica.
On 19 March 1882, construction of the Sagrada Família began under architect Francisco de Paula del Villar. In 1883, when Villar resigned, Gaudí took over as chief architect, transforming the project with his architectural and engineering style, combining Gothic and curvilinear Art Nouveau forms. Gaudí devoted the remainder of his life to the project, and he is buried in the crypt. At the time of his death in 1926, less than a quarter of the project was complete.