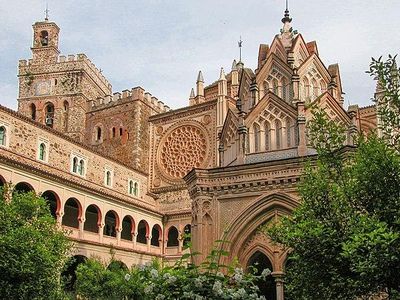 The Royal Monastery of Santa María of Guadalupe is a Roman Catholic monastic establishment in Guadalupe, in Extremadura, Spain. It is located at the foot of the eastern side of the Sierra de las Villuercas and was one of the most important and fine monasteries in the country for more than four centuries. UNESCO declared it a World Heritage Site in 1993.

The monastery had its origins in the late 13th century, when a shepherd from Cáceres, named Gil Cordero, discovered on the bank of the Guadalupe River a statue of the Blessed Virgin, which had been apparently hidden by local inhabitants from Moorish invaders in 714. On the site of his discovery a chapel was built, dedicated under the title of Our Lady of Guadalupe.