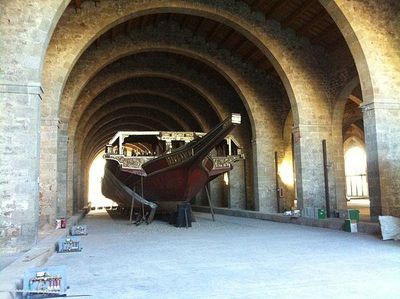 The Barcelona Royal Shipyard is a shipyard and former military building of Gothic architecture placed at the Port Vell area of the Port of Barcelona. Nowadays it houses the Barcelona Maritime Museum. Construction started during the 13th century under the rule of Peter III of Aragon. During excavations in 2012
it was discovered that in the late 16th century a new building was constructed on top of the old medieval dockyard, giving the building its current structure. This excavations also uncovered a Roman graveyard. The shipyard's restoration was finished in early 2013. The museum was reopened in 2014.
From the beginning the aim of the shipyard was to build the galleys for the Aragonese Armada. The shipyard was also a naval arsenal, which was used to store galleys and all the rigging and apparatus needed. The arsenal also produced a great deal of material, both sales and cordages for the ships and arms for the men. Naval arsenals of the time, normally, had to produce and store food also.