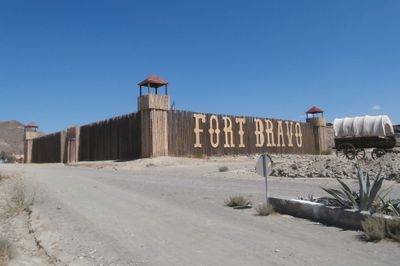 Texas Hollywood/Fort Bravo is a Western-styled theme park built in the early 1970s. Around 1977, Rafa Molina, a stuntman, bought the set for US$6,000 to improve his job opportunities if the set was to be used for filming. In the early 1980s, he started charging visitors money to tour the set. Mock shoot-outs and barroom brawls were later added, and one of the buildings was converted into a full saloon to sell beer. It is now known as Fort Bravo. Texas Hollywood remains an active film set. The television series Queen of Swords was filmed here in 2000.