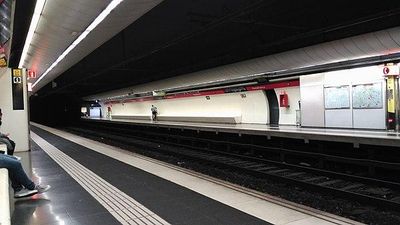 Hostafrancs is a Barcelona Metro station, named after the Hostafrancs neighbourhood, in the Sants-Montjuïc district of the city of Barcelona. The station is served by line L1. The station's name is still occasionally written as Hostafranchs, following the old Catalan spelling, chiefly in Spanish-language contexts.
The station is located under the Carrer de la Creu Coberta between the Carrer Moianès and Carrer Consell de Cent. The station can be accessed from entrances on all three streets. It has twin tracks, flanked by two 88-metre long and 4-metre wide side platforms.