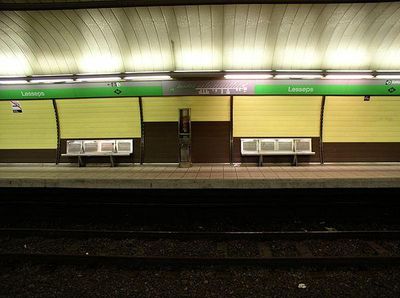 — Line 3, currently known as Zona Universitària – Trinitat Nova, coloured green and often simply referred to as Línia verda , is a metro line in Barcelona operated by TMB, and therefore part of the fare-integrated ATM transport network of the urban region. This V-shaped line is the result of the junction of two related lines: the original L3 and L3B, in 1982. The central section of L3 has the city's oldest metro stations, built in the mid-1920s, with additions almost every decade since then. All of L3 stations are underground.
Its termini as of 2008 are Zona Universitària, which serves the University of Barcelona campus located in the western end Avinguda Diagonal in the Les Corts district, and Trinitat Nova in Nou Barris. There are plans for it to be extended from Trinitat Nova to Trinitat Vella, for connection with Line 1, and possibly further south of Zona Universitària, where it would join new lines L9 and L10.