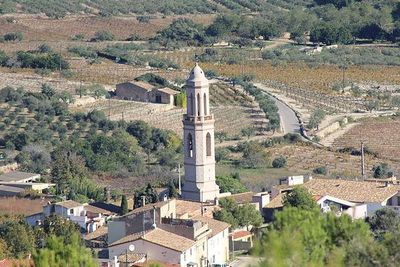 Albinyana or Albiñana is a village in the province of Tarragona and the autonomous community of Catalonia, Spain. It belongs to Tarragona in the Baix Penedès region. According to data from 2009, its population was 2,275.

In the eleventh century, Viscount Guitard built his castle in Albinyana. His son Adalbert, who died during the Reconquista, bequeathed the place to the Monastery of San Cugat. In 1040, the abbot of the monastery ceded the lands to Bernat Otger on condition that he would rebuild the castle and take care of its defense. On being located in close proximity to the border and fearing Saracen attacks, the castle remained uninhabited for a long time. It belonged to the monks of Sant Cugat until the end of the lordships. There are no remains of the castle today although it is believed that it was located in the same place that today forms the center of the village.